UK - Order before 1pm for next day DPD delivery Dismiss

Skip to content
The road to the expedition
Over a year and a half ago I applied to go on a cadet tri-service expedition to the mountain kingdom of Lesotho to take part in an expedition to celebrate the 150th year of the cadet forces. The selection process began with an initial application letter to Head Quarters Air Cadets which once approved meant that I had to attend a leadership assessment weekend in Devon and six months later, a fitness assessment weekend in the Brecon Beacons. Being under constant scrutiny during selection is hard to cope with because in the back of your mind you are always worried that you might say or do something that would affect your chances of being selected. However, luckily I managed to complete all of the challenges and was selected to take part.
Phase 1: Preparation and acclimatisation in Kwa Zulu Natal
The first thing you notice about South Africa is how much the temperature can change and how quickly it does it. Whilst we were sweltering on the bus on the way to our first camp at Em’Seni it was hard to comprehend that it was likely to fall below freezing at night. As predicted on the first night the temperature fell just below freezing and although in itself that may not seem too extreme, only an hour prior anything other than shorts and a t-shirt would have been too hot to wear.
In order to acclimatise for deployment into Lesotho it was important for all of the cadets to complete practice walks. The first walk was up Spioenkop, the site of the historic victory for the Boers against the British during the Anglo-Boer war. Much of the walk was a scramble up the side of the mountain around the large outcrops of rock. The walk was challenging for many in the group because the change in the altitude meant that many people were left short of breath. However, after we had spent a few days playing sport everybody had managed to overcome this.
Acclimatisation was important but it was essential that the groups knew mountain skills as well because the nearest hospital was a 13 hour drive or a 4 hour helicopter flight back into South Africa. Whilst at Em’Seni we practised casualty evacuation methods and first aid training such as how to recognise altitude sickness and how to treat being bitten or stung by animals.
In order to relax before we went into Lesotho Team 1 and 4 spent some time in Weenan game reserve. Whilst there we spent some time tracking animals and were lucky enough to see both Black Rhino and a White Rhino with two calves. Our guide Marseille also shot a Blesbuck (a antelope about the size of a deer) which he explained how to skin and all of the practical uses of the animal. Once he had completed that I had a chance to butcher the animal and on the last night we were there we followed the great South African tradition of having a Braai on a Sunday by braaing butterfly steak and Scotch Filets. 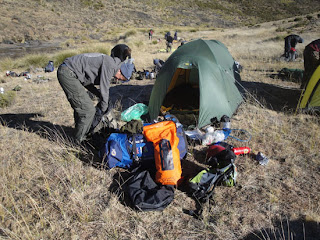 Phase 2: Charity work, expeditions and abseiling in Lesotho
Crossing the border into Lesotho provided a complete culture shock. Within fifteen miles of the capital Maseru there are no roads, sporadic electricity supply and little running water. We drove to the capital Maseru where we were visited at Sentebale’s headquarters by Prince Seeiso to learn a little about the projects we would be working for. The team I was in (Team 3) were to be working at the Semonkong Methodist Children’s Centre which is run by European missionaries whose aim is to provide shelter, food and an education for the orphans in the area.
When we arrived at the Children’s Centre, after a 13 hour drive, the entire orphanage had stayed up to greet us and children from three to eighteen years had stayed up well past their bedtime to greet us with singing and dancing. It was perhaps the singularly most moving experience I had ever had witnessed, the children were truly excited to see us and throughout the next week that was a major motivational force behind all of our work. For our project work the group was split into two; a team to strengthen the boundary fence and a team to decorate the orphanage.
Team 1 who were also staying in Semonkong but working at a different project, St Leonard’s Catholic Mission, were helping to teach at the Herd Boy’s School where they were taught basic writing, arithmetic and English. They also had a large amount of decorating task to complete and because of this Team 3 spent some time there helping Team 1 to complete their project work. One of the task at St. Leonard’s was to paint the girl’s accommodation where there were cracks in the walls you could see through and paint peeling off the roof onto the girl’s belongings. After a joint effort between both teams and our own money being put into buying supplies of pink paint the girls walls the task was eventually completed. When the girls saw their room looking feminine for the first time and finally decorated they burst into tears and began to sing to show their appreciation of our work.
The second of the two elements of our time in Lesotho was the adventurous training part. This would comprise a three day expedition and a chance to abseil the world’s longest single pitch abseil which runs down the side of the Maletsunyane falls.
Nothing can describe the feeling you experience when you walk over the edge of a sheer two hundred metre wall with a waterfall to your right and nothing but a gorge to your left. The initial walk over the edge was also the hardest section because the abseil system we were using meant that we had to pull the weight of the entire rope up in order to attach the mechanism to it. However, the initial struggle was definitely worth it as the views from the abseil were unparalleled – one of the highlights being when an endangered Bearded Vulture flew from the cliff to circle at the same altitude as me. 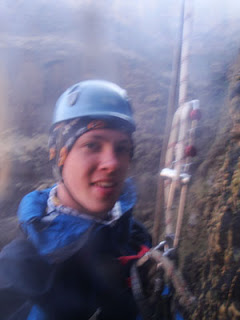 The aim of the 3 day expedition was to summit Thaba Putsoa which at 3096m was the largest mountain in the area. The first day involved trekking and setting up our base camp. In the evening it was bitterly cold and although the weather forecast had predicted snow we were all hoping that it would stay dry because snow would make the final ascent of the mountain much more technical. When we woke up on the second day I was glad for my 4 season sleeping bag because during the night the temperature had gotten down to -15C. All of our water bottles had frozen and all of our zips were frozen stiff and luckily after much coaxing began to work. Some of our group had suffered the day before and it was decided that they were to summit a lower peak. The group to summit Thaba Putsoa left early and because of the altitude and distance that needed to be covered had to move at a quick pace. In order to reach the summit with as much time as possible, before the final traverse we all left our equipment and began the final scramble to the top across the ice covered south face of the mountain. The views at the top were absolutely stunning and because of the clarity of the air we could make out the capital 100miles away to the North. Both sections of Team 3 managed their objectives during the expedition thus ending our time in Lesotho on a high.
Phase 3: Isandlwana, Rorke’s Drift and Elandsheim
The final part of the trip was based at Elandsheim which is close to the sites of the iconic battles of Isandlwana and Rorke’s Dirft, which was portrayed in the film Zulu. The final part of our time in South Africa was a wind down on the expedition and as such we had much more time to ourselves in which we could play sports with Volleyball and Rugby being firm favourites.
Our battlefields tour was done very much in reverse order, with the teams visiting Rorke’s Drift first. Our guide, Reggie Purbrick, explained how the battle progressed and imparted vivid stories to the groups whilst laying a context for the Battle of Isandlwana.
At the site of the battle of Isandlwana we climbed the iconic mountain to gain a bird’s eye view of the battlefield. Reggie explained the monumental losses that the British experienced during that battle with all but a handful of the one and a half thousand men being killed by the Zulu army. The next stage in our tour was to follow the footsteps of those men that had escaped with the Colours towards the Buffalo River. We walked the route of the Fugitives drift which at the end required a crossing of the Buffalo River, which at this time of the year was only knee height but would have been at least 10 foot deep when the soldiers tried to cross during the wet season.
The final evening began with a short dit performed by the each of the teams about their time in Lesotho and a final few words by the expedition leaders Lt Col Nick Arding RM. After the formalities the traditional braai of Steak and Wors began and the teams spent their last night together in the Southern Hemisphere.